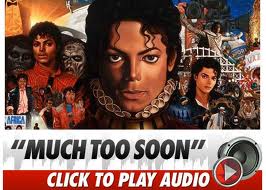 After failing to secure a link-up with Facebook Apple has managed to get first dibs on Michael Jackson’s latest song which premiers on its social music service: Ping.

Whacko’s â€˜Much Too Soonâ€™ is just the thing to mainline Ping into those casual users of iTunes as well as featuring the latest generation of iPods.

Ping will have the track exclusively for a week and this coup was unveiled on the dead King of Pop’s official website.

This single release follows the outing of two singles last month, â€˜Hold My Handâ€™ and â€˜Breaking Newsâ€™ ahead of the album â€˜Michaelâ€™ which drops on December 14th in time for the Christmas chart rush.

Is a posthumous single exclusive enough to tempt you to Ping?