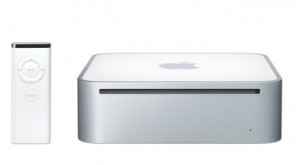 After the initial reportsÂ that theÂ  Mac mini was being killed offÂ a new version is rumoured to be appearing at MacWorld 2009 according toÂ Gadget Lab:

Apple will launch an upgrade to its low-end desktop, the Mac Mini, at January’s Macworld Expo in San Francisco, according to an Apple corporate employee who contacted Wired.com.

The source, who wished to remain anonymous (to keep his job), could not disclose details about the Mac Mini other than its upcoming announcement at Macworld Expo, which begins Jan. 5.

Wired is backing this info but isÂ unable to bolster it with any other good solid follow-up meat.

A guesstimateÂ on the specs include theÂ likes of an aluminum brick design (in a desktop? why?), DisplayPort, and 4GB of RAM maximum, with 2.0-GHz Core 2 Duo and a 2.3-GHz Core 2 Duo.

Have you heard anything about this?