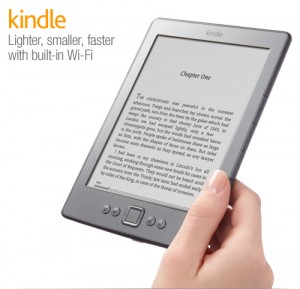 How time flies – believe it or not it is already four years since Amazon decided that the future was the ability to carry a load of books in a sleek, easy to use, electronic reader – thus the Kindle was born. Four years later its the most popular electronic book on the planet.

Now we have the Kindle Touch and Touch 3G joining an all new Kindle! That doesn’t mean that the new Kindle is just a reheated version of last nights e-reader. Oh no!

The new Kindle is 18% smaller and 30% lighter than the current Kindle.

Gone is the keyboard but the trade-off is a multi-way controller that quietly sits at the bottom of the device ready to be utilised for all navigational duties. There’s 2GB of storage, which equates to around 1,500 books – and a claimed battery life of up to one month with the wireless switched off.

You can Preorder the new £89 Kindle now

before the 12th October release.