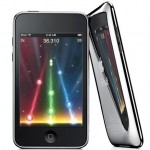 Well, as we’ve all survived the Large Hadron Collider being started let’s have a look at the new iPod Touch.

Jobsy says that it stillÂ “has the same gorgeous 3.5-inch display”, but is even thinner, has built-in speakers,Â better artwork on albums and videos and an inbuilt app store are all being added.

But the killer thing is that it will feature Nike+ support, which has the receiver built in, meaning the user just needs a transmitter for their shoe, and off you’re go – measuring all those pies ‘n’ pastries that you’reÂ burning off.

“You could make a pretty good argument that the iPod Touch is the best device to play games on”, Jobs goes on to say………………..MMmmmmmmmmmmmmmmk.

It does sound pretty fab. The battery life is improved, iPhones won’t crash, backing up to iTunes is “dramatically faster”, all available this Friday, for free for iPhone owners.

Shame that they forgot to put in GPS though :(Â  Now, would that have hurt so much Mr Jobs?
Apple