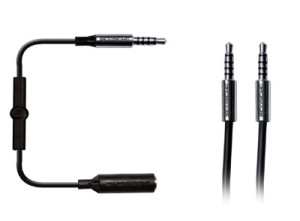 Yup.Â  Apple, in their wisdom, have moved all of the buttons from the Shuffle itself and put them on the earbuds cable.

So, now there’s plenty of manufacturers out there making their own versions especially for the Shuffle and for ca$h.

But, like you no doubt, I already have ‘phones that i use and enjoy – for me that’s my Koss Porta Pros andÂ Audio Technica ATH-ES7’s .

Neither of which I would fancy having to get rid off just because the Shuffle comes with those “great” Apple phones.

Thankfully Scosche have created a solution.

Their adapater will allow you to plug in any set of earbuds or headphonesÂ  into your Shuffle and still have those controls.

It also makes it so that you can plug your shuffle into an aux input.

Unfortunately that’s just about all I know at the mo.

But, to me this is a better idea so, as soon they start releasing more information I’ll let you know 🙂