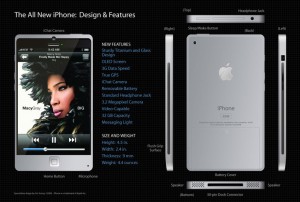 I think that most of us are pretty certain that a new iPhone model (maybe even two if the iPhone Nano makes an appearance) will be announced in June.

Now the Commercial Times have chipped in with a report that states components from Taiwan-based suppliers have started being shipped to Apple’s China-based assemblers in preparation for a “June launch” – and they’re talking numbers of 2-3 million units per quarter.

Well, according to all the firware code cracking and rumours from all over the world 😉