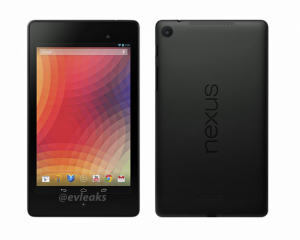 There were rumblings before the weekend about the successor to Google’s all-conquering Nexus 7 tablet – and now there’s new press photos to back them up.

The latest shots of the next Nexus 7 appear to be on the up-and-up and come courtesy of @evleaks’ Twitter account.

The face of the new 7-incher seems to retain the same qualities as the original Nexus 7, being loaded with a front camera and notification light at the top.

The main exterior updates appear to the rear of the tablet. Here you’ll notice the addition of a rear-facing camera of unknown resolution and a pair of speakers. Those changes could well see the new Nexus elbow in on the iPad Mini’s action.

Google also seems to have opted for a smooth surface for the back and are moving away from the pock-marked design used on the first gen Nexus 7.

Android Central got the low-down on the next-gen Nexus packing a 1920 x 1200 display resolution through a Best Buy brochure posted on Google+, along with a US$229.99 price tag for the 16GB version.

Pricing for the 32GB version is still unknown at this point.

Other speculative specs include 4G LTE and NFC connectivity, 2GB RAM, a 3950mAh battery and, with any luck, the updated Android 4.3 OS.

Details are expected to break on (or before, thanks to leaks) the Google event planned for July 24th.