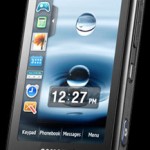 I had this land in my inbox today.

It looks to be a new camera phone from Sammy called the Pixon.

It’s a touch screen jobby with an accelerometer and an 8mp snapper.

MP3’s should sound pretty good as it comes loaded with the SRS system.

The press specs are thusly presented:

It’s said to be arriving in November with a Â£400 price tag – prolly best to get it on a contract huh?

The press chappy asks me to point you hereÂ : www.thephotographicadventuresofnickturpin.com to get involved.