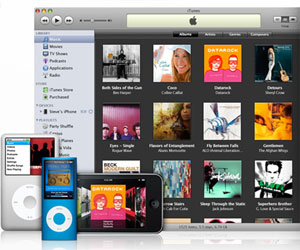 As well as the new iPod Touch the Nano has had a revamp.

Finally after all the speculation and ‘spy pics’ we can see the new design all offical like.

As well as the New Nano there’s an upgrade to the 80GB Classic.

Steve announced, “We shipped the first Nano in 2005, it’s only been three years” and then unveiled the new Nano – which is pretty much like the spy shots that cluttered the interblogwebsphere for the last 2 or 3 weeks.

“It’s the thinnest iPod we’ve ever made”, it has an oval shape, and comes in a chrome-look exterior. The screen is high-res says Jobsy with the new lanky body.

You can create Genius playslists on the iPod Nano, without it being connected to a PC, plus features an accelerometer, so when you turn it sideways, you can watch video and check out your photos in landscape mode.

I’m particularly diggin the “shake to shuffle” feature, which does exactly what it says on the tin.

There was also the small matter of “these iPods are the cleanest and least-toxic iPods we’ve ever created”.

The Nano will blast out in eight new colours (just click the pic for the full range!) and the 8GB will be $149, 16GB will be $199, and both models will ship in next few days.

New Apple headphones are also launching, with a little control located on the headphone wires, so you can play/pause, rewind, forward and turn the music up as well.

New in-ear headphones are also launching, they have two drivers each in them, a woofer and a tweeter, they will sell for $79