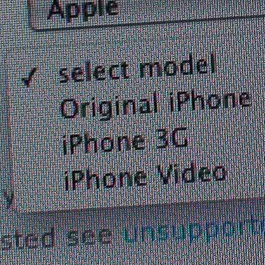 TUAW has bounced some very interesting and odd news up on their site.

They’ve had an anonymous tip stating that AT&T’s support website will be updated with “iPhone Video” as a model choice when choosing Apple as the phone manufacturer.

Why would Apple change the name of the handset?

Everyone must be aware that there’s a rumoured front-facing camera and video capture capabilities – is that enough to add video to the name?

I’ve been to the site and there’s only the original iPhone and 3G choices at the mo so I’m guessing this was an insider shot.

Combine this with AppleInsider’s news that new model placeholders have begun appearing in inventory for Carphone Warehouse with a “V3” label.

I thought that was just to depict Version 3 (hence not reporting it) but now I can see that the V may also stand for “Video” or “Video 3G”.