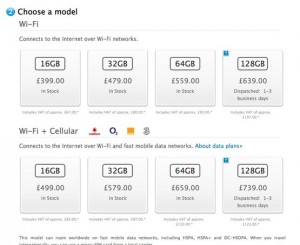 Apple’s new 128GB iPads have gone on sale in the US and the UK today allowing people who like to store things, store even more stuff.

The new model, which is exactly the same as the current Apple offering except for the new capacious storage, costs $929 for the Wi-Fi version in the US and £739 in the UK.

There are those saying that this puts the Apple tablet in laptop bothering country. I could see it possibly taunting Microsoft’s Surface Pro which should land next week but these are both very different beasts.

Microsoft’s computer is a computer, running a full-fat desktop OS capable of running powerful apps like Photoshop and more. It’s powered by an Intel Core i5 processor. It does come equipped with up to 128GB of storage, features a number of input and output ports, and has a fancy stylus for handwriting. Granted…. not all of that 128GB is available for storage as been noted with the Surface RT.

The iPad is not, however, nor has it ever been, in direct competition with Windows-driven portables.

In fact, the iPad has made its enterprise progress in spite of not being able to do all those things the Surface Pro is trumpeting about. People seeking out the Apple tablet for business use aren’t doing so because it has full Windows software support – it doesn’t. People are using iPad’s much the same way as they’d use Powerpoint, a note pad and other office-type things. It has become an easy way to get your ideas across.

The thing is, most workplaces are stuck with Windows and this is where the Surface Pro holds the cards.

I would love to spend a decent amount of time with the Surface Pro just to see how it fares in the modern office environment.

Although the online store is now listing the new models, the buy it now button says 1-3 days availability.