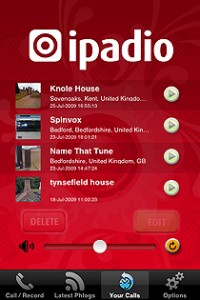 There’s already quite a few apps that will get your audio recordings onto the interwebs from your iPhone.

Trottr actually will do this from any phone as it’s a simple call-in or upload system whereas the Tweetmic iPhone app gains its popularity through its ability to publish on Twitter – but it lacks a social network.

AudioBoo.fm (as used by a certain Mr Fry) was launched in December 2008 and is making waves as an iPhone-only app which works very well indeedy.

iPadio could nudge Audioboo of its loft perch as it can stream live audio into a web page, manages high quality uploads from the iPhone and has a live phone-in service.

Not only that, iPadio also has an upcoming Android app.

It was actually released to the public at the end of April but was based around making a phone call to get your audio online – this new version of the iPhone app  is awaiting for approval in the App store will bring heaps more to the party.