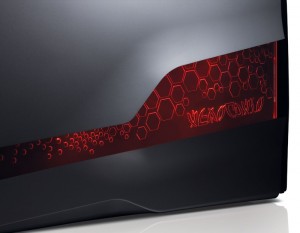 Gamers with a more than average budget rejoyce!

Alienware have broken their silence and followed up on their ‘Invasion’ teasers.

Well, there’s a refreshed Area-51 M15x laptop which carries the usual “most powerful 15-inch gaming laptop in the universe” tagline.

Snuggled up to that is up to 8GB of DDR3 RAM, a 500GB HDD or 256GB SSD, slot-loading Blu-ray drive, FireWire, gigabit ethernet, a fist-full of USB 2.0 sockets, VGA and DisplayPort video outputs, an ExpressCard slot and an 8-in-1 card reader.

Like most gaming ‘laptops’ it’s portable but not on a day-to-day basis – this 1.92 inch thick lappy weighs in at 9 pounds.

The all-new Area-51 and Area-51 ALX desktops have a funky new look with equally flashy (and no doubt expensive) internals.

The Area-51 is a liquid cooled muthalover with factory overclocked Core i7 CPUs (as high as 3.6GHz), an array of multi-GPU options from ATI and NVIDIA, internal lighting effects and a handy door so you can slip easily into the HDD bay.

The HDD’s are all loaded via a cable-free dock, and there’s enough room for six SATA II HDDs.

The rig also holds up to 12GB of 1,333MHz DDR3 memory, twin Blu-ray drives and a pair of gigabit Ethernet jacks.

The ALX model bumps things up (and is of course the proud holder of the title “the most powerful desktop” from Alienware) with the optional 3.86GHz Core i7 975, twin 1.8GB GeForce GTX 295 GPUs and a power supply that requires its own grid!

The Aurora ALX is the daddy of the microATX‘s and is liquid cooled and can be fitted with a 3.6GHz Core i7 975, dual 1GB ATI Radeon HD 5870 GPUs and up to 12GB of DDR3 RAM – whereas the slightly more wallet friendly Aurora gets a title of its own – the smallest mid-sized desktop ever crafted by Alienware.

The Aurora can be upgraded almost as much as the ALX.

No official prices as yet but I’m sure they’ll be there once the product pages go live.