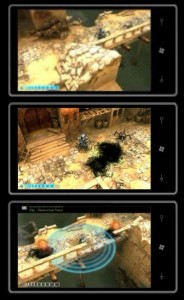 Exciting times at MIX 10 where Microsoft took the Las Vegas stage in order to show off a lot of the applications that will soon be hitting the streets with Windows Phone 7 Series.

Because Silverlight 4 and the XNA Framework have been baked into the Windows Phone platform this unleashes quite a bit of power to the developers who, judging by the demos, have jumped at the chance of showing what can be done on modern smartphones.

The usual run-of-the-mill apps were present; such as Twitter client Seesmic, location-based social network Foursquare, music identification service Shazam and the Associated Press but the ones that made me sit up and take notice were Netflix and the slickness of Windows Mobile 7 Series love of gaming!

Netflix is quite a popular video rental service and most of its mobile apps are focused on accessing and modifying the user’s list of movies. Now, Netflix can be used to stream your choice of flicks on the likes of the Nintendo Wii right through to TiVo but thanks to the lovely Silverlight you can sling those films right onto Windows Phone 7 Series devices to watch as you go 🙂

Even though rumour has it that the iPhone may grab this before Microsoft gets it out the display of gaming on Windows Phone 7 Series handsets was pretty impressive.

The Harvest was demoed and what was highlighted was that this game could be played on a Windows Phone, PC, or Xbox 360 and no matter which platform you choose as your arena you can unlock achievements, increase your gamer score, access leaderboards, and connect to your friends over Live.

Microsoft’s Charlie Kindel said that “Developers and designers can now build their code once and optimize it to take advantage of the unique capabilities of the phone, Web, PC or Xbox 360. Due to common shared libraries, controls and runtimes across these many screens and the cloud, developers now have the opportunity to reach over 1 billion customers,”

This can only push things forward – what say you?