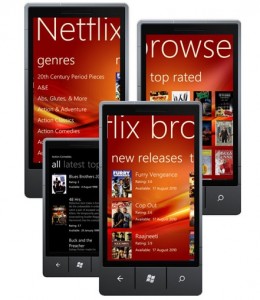 When deciding on a smartphone these days one of the concerns of buyers is the choice of apps available. Android looks to be getting some hefty PlayStation action, iOS is well catered for and now Windows Phone has got Netflix for all you film lovers on the go.

An update to the Netflix app for Windows Phone handsets sees the video on-demand service become available on Microsoft handsets in the UK and Ireland.

Following successful launches for iOS and Android devices, the app now comes to UK users of Microsoft’s mobile operating system – well timed if you happen to be waiting for your Nokia Lumia 900 to arrive.

“Netflix on Windows Phone has always been popular with our members in US and Canada, where it has been available since November, 2010. The expanded support will allow Netflix members anywhere Netflix is available to enjoy TV shows and movies on a broader selection of smartphones,” says a post on the Netflix blog.

The update, which requires Windows Phone 7.5 Mango, brings with it support for subtitles, more languages and includes an improved UI which makes it easier to browse your favourite flicks.

The app also allows users to pick up films and episodes where they left off across a range of different devices which means that you can start watching a film on your tablet on the train, flick over to your phone on the bus and then squirt it over to your telly or puter when you get home 🙂

The Windows Phone operating system is pretty good and its main stumbling block is the lack of top-level apps, compared to iOS and Android. But, like getting a major coffee chain in your town, getting Netflix on the platform must be a sign that WinPho is an up-and-coming smartphone OS.

Anyone used the mobile streaming service?