Netbooks killed off – Acer and Asus pull the plug 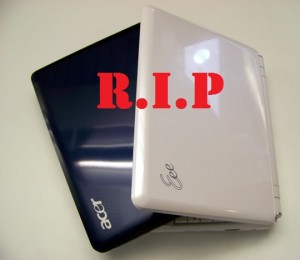 I’ve always been suspicious about Netbooks. You know, those underpowered laptops designed for the coffee shop browser. Asus and Acer have followed Dell in confirming that the netbook is officially dead.

With the appearance of tablets and Ultrabooks then end was never far away for the Netbook. Reports that Asus and Acer have officially ceased producing them has definitely slammed the final nails in to the feature-light laptop’s coffin.

The short life-span of the Intel Atom-powered puters started off with pocket-friendly-priced Eee PC back in 2007. It wasn’t long til the Asus was met with Acer’s Aspire One.

For those looking for a highly portable and, more importantly, cheap device with decent battery life to sate their browsing and basic computing needs, the Netbook may have appeared to be somewhat attractive five years ago.

The thing is, if you want swift access to the web or to be able to squirt off an email today you’d probably reach for your Nexus 7, iPad 4 or iPad Mini. If you intend to do more typing and require some extra grunt for more processor hungry applications, then you may consider an Ultrabook such as Lenovo’s carbon fibre constructed ThinkPad X1 or the HP Envy Spectre XT.

From the manufacturer’s viewpoint, the fact that the margin on Netbooks has had to be very tiny to make them so attractive, making and selling them was becoming increasingly poor for business.

Do you own an Netbook or have you swapped to a tablet or Ultrabook?