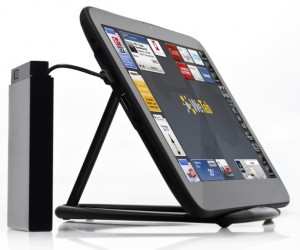 If you’ve been waiting for update as to what’s going on with Neofonie’s iPad rival, the WePad, I can explain why you may have missed the news.

The company has probably seen the light and not fancying a court case with Apple – instead they’ve opted to rename their tabled WeTab and have announced that it’s all set for a July release.

Apparently it will bounce out with a RRP around 449 euros, which is just under Â£390.

The WeTab is motors along thanks to a 1.66GHz N450 Atom processor with 1GB of RAM. There’s 16GB of flash memory on board, with the option to expand using a SD card and there’s also two USB ports.

Wi-Fi, 3G, Bluetooth and GPS are all present and correct.

The WeTab’s screen is an 11.6 inch number with a resolution of 1366 x 768 which, quite frankly, reads better than the Apple version but I can’t say if it’s as nice to use until I get my mits on it.

The WeTab is a little heavier than the iPad (probably partly due to the larger screen) and weighs in at 800g compared to 730g for the Wi-Fi iPad.