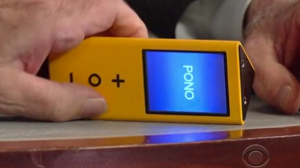 Musician, Neil Young, isn’t against people sharing music but he has been quite vociferous about the quality of digital music – to the point of appearing on the Late Show with David Letterman, to unveil his new HD music player: Pono range.

The legend, Neil Young, has previously spoken out about the fact that “The MP3 only has 5 percent of the data present in the original recording. … The convenience of the digital age has forced people to choose between quality and convenience, but they shouldn’t have to make that choice.” and now he is flashing his new Pono around.

Rolling Stone reports that Pono is in fact a music ecosystem: a music download store, a tool that converts digital audio files into analogue-sounding recordings, and a range of audio players.

That digital-to-analogue conversion technology is reportedly intended to “present songs as they first sound during studio recording sessions”.

I’m not sure how this magic works and whether or not it involves unicorn tears but I do know that Pono means Righteous in Hawaiian.

The Pono player that Young showed off on TV is a big, bright yellow triangular prism – kinda like a day-glow Toblerone.

Bucking the trend of large touch-screened players the Pono appears to have a small display with minimal controls but is equipped with what looks to be a pair of headphone ports for friendly sharing.

According to Rolling Stone, one of the few people to hear how great Neil Young’s Pono is was Red Hot Chili Peppers bassist Flea.

Flea stated that “it’s not like some vague thing that you need dogs’ ears to hear. It’s a drastic difference.”

Colour me intrigued for now – what do you think?