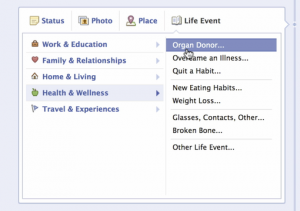 The problem with most Social Networks is people’s propensity to over-share. But telling everyone that you’re an organ donor?

I can put up with the “just having some bacon” updates. Even the “I love you Mr Snookums” and then Mr Snookums’ sickly sweet response. The attention grabbing status change to ‘Single’ is usually followed by lots of heart-felt words of wisdom and confessions that their ex was never really liked – all of which more-or-less comes with the territory but…

Is virtually bragging that you’re a donor a good thing or just a tad tasteless?

Now, I have been known to do the odd bit for charity and I don’t feel the need to tell everyone about it. Perhaps that’s not the right way as there are those on Facebook, Twitter, etc that will openly tell all their friends and followers “made a huge donation to the Aardvark Sanctuary in Thanet today” – I don’t think that place actually exists but you may know someone that does similar.

Now Facebook has added a new thing to your Timeline which enables you to add whether or not you are an organ donor.

The new status type comes under the ‘Health and Wellness’ section of your ‘Life Events’. Click on it and you’ll be able to tell people when and why you became a donor.

Now stop me if things have changed since I worked in the NHS but, as a donor, don’t you carry a card that says it’s alright to use you for spare parts if you no longer need them? How many Doctors will log on to your Facebook page to check that it’s ok to remove your heart or some other vital part of your innards?

If you’re not already on the donor register then Facebook even points you to the appropriate site to become a donor based on your region.

I suppose making it easier to become a donor may increase the numbers – but if you were thinking about becoming a donor would this make up your mind?

Facebook’s official posting says that “We never could have anticipated that what started as a small network would evolve into such a powerful tool for communication and problem solving,” before going on to state “As this happens, we hope to build tools that help people transform the way we all solve worldwide social problems.”

Would you say that this is a useful thing to have on a social network or is this just another way for those ‘look what I am doing – how selfless am I?’ types to feel even more smug?

Perhaps I’m just a bit grumpy and should go out and save some kittens – and then tell everyone what I have done for virtual pats on my back and internet-based ego stroking.

Organ donors are good people and we do need more, the same goes for blood donors – please let me clarify that 🙂