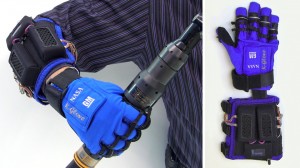 NASA and GM’s have teamed up in order to develop a robotic glove which will make working with heavy tools much easier.

The Human Grasp Assist device, or K-glove, or Robo-Glove (whatever they decide to call it) uses pressure sensors in the fingertips track when the wearer grips something and then automatically tighten actuators in the fingers, providing extra grip.

Without the glove’s assistance the user would probably have to exert around 15 to 20 pounds of force to grip a tool. The special gloves could be used in space or on a factory production line and reduce the force needed to between 5 to 10 pounds.

That all adds up to less fatigue in the hands, less injuries and more opportunity to perform tasks for longer.

The current prototype weighs in at two pounds, which of course is two more pounds the wearer has to lift while using the glove.

GM and NASA are working to make it lighter so it’s less cumbersome to wear and, I guess, more like normal gloves.

Surely it’s only a matter of time before there’s a full Iron Man suit available!