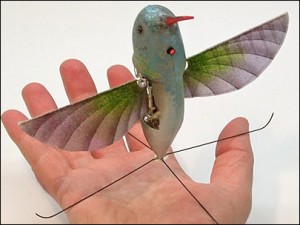 Next time to see a bird whiz past you may be just as well to think twice about it.

If you cast your mind back to 2009 I wrote about DARPA’s hummingbird bot – well, since then it has been officially named and looks even more impressive.

AeroVironment’s Nano Hummingbird actually looks and flies like a real, honest to goodness hummingbird – ok, as long as you’re not Bill Oddy, Chris Packham or actually take too much notice of it.

The tiny feathery spy is packing an built-in camera with a downlink that’s capable of transmitting live video.

According to the company, the hummingbird’s also able to hover for up to eight minutes, reach speeds of eleven miles per hour in forward flight, and remain stable in wind gusts of five miles per hour.

It’s certainly more graceful and subtle than Big Dog which is also from the DARPA range of military robot critters.

Check out the Nano Hummingbird fly, spy and make a perfect landing in the video below.