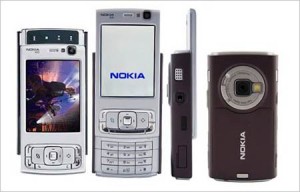 The Nokia N95 – I have one, my brother recently got one and now my boss has got one – and so does a heap of other people!!

Nokia has announced that since hitting the shops in April sales of its N95 handset have hit the one million mark within the UK.

“The Nokia N95 has more than lived up to the hype around its launch as one of the must-have gadgets this year â€“ sealed by hitting the one million sales mark.” said Andrew Connell, head of multimedia, Nokia UK.

“The N95 not only looks good, but also packs a punch by delivering on a groundbreaking features set that takes mobile communication to a new level in convergence devices.”

The 8GB Nokia N95 won the “Best Mobile Phone” of 2007 in the recent Pocket-lint awards.