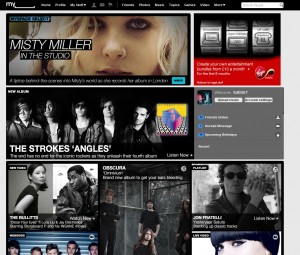 MySpace is still struggling with its hold in the social space on the interwebs.

The once popular destination has lost 10 million unique users in the last few weeks (between January and February 2011) and has dropped down to 63 million members.

Tech analyst ComScore reported that MySpace had 63 million users in February 2011, as compared to 73 million in January 2011. In the same period last year Myspace was still attracting 95 million unique users.

You will have no doubt heard that Myspace cut 500 jobs earlier this year and appears to be losing its battle with the blue bannered social network which now appears unstoppable with Facebook claiming half of the UK’s population as members.

I remember those halcyon days when Myspace was the place to go to chat with friends, share your taste in music and films as well as it seeing a number of bands and solo artists getting snapped up by labels.

Mike Jones, MySpace’s chief executive, said that by the end of 2010 that MySpace was no longer a social network and Facebook rival.

He claims that “MySpace is a not a social network anymore. It is now a social entertainment destination”.

Were you or are you a Myspace member? Do you still use it?