Murata Update Their Agile Balance Bots – There is Now NO Escape! 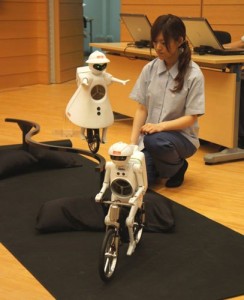 If you thought you’d be able to escape an armed robot by sprinting over a thin plank of wood across a ravine then think again.

Japan-based electronics company Murata have updated their Little Seiko, a small girly humanoid robot that can unicycle forwards and backwards and also is able to stop without falling over – her brother, Little Seisaku has similar abilities. These skills are thanks to a sophisticated slant detection function and the balancing system placed in the chest.

Both droids stand 50cm tall and weigh around 6kg.

They both can be remote-controlled via Bluetooth or Wi-Fi and are equipped with cameras.

Little Seisaku can now be recharged wirelessly and consumes less energy than the previous model. To break him out of standby mode he now just needs to be touched on the head (which contains IR sensors).

Little Seiko, on the other hand, can now not only unicycle across a straight balance beam but is able to make it over an S-shaped balance beam without falling over. The balance beam can be as thin as 2.5cm, while the tire of Little Seikoâ€™s unicycle has a width of 1.5 cm.

There will soon be no escape.