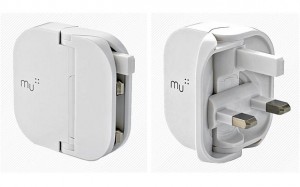 Two years ago I wrote about the design for the first update to the humble British electric plug since 1947 – that design is now available to buy!

The news was that Min-Kyu Choi, a designer who hails from South Korea and trained at London’s Royal College of Art, came up with the genius concept and design for a folding plug.

When compared to the standard 4.5cm plug the Mu plug, as it is now known, measures a mere 1cm.

The prototype picked up a fair bunch of design awards when it was originally unveiled. In fact, sculptor Antony Gormley has declared it to be “intelligent, elegant and inventive” in terms of design and, finally, it will hit the production lines.

As you would expect, the new plug totally complies with the UK’s stringent regulations.

The Mu can be bought from themu.co.uk and from London’s Design Museum at £25 a pop.

£25 might sound a bit steep but you’re also buying a historical design piece.