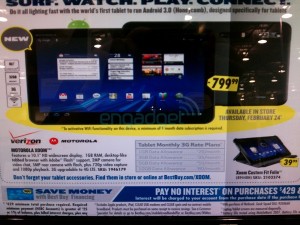 It appears that the new Moto tablet is going to cost around $800 (Â£496 before Brit Tax) – so it looks as though Motorola are aiming for the premium tablet sector with their latest toy.

The Honeycomb loaded XOOM’s release date is also listed as February 24th which is a week later than previously spotted.

We also get to see what the data tariffs attached to the XOOM will be – and those range from $20 for 1GB to a ouch inducing $80 for 10GB.

If you had no interest in watching some American packers play with a superb owl last night/this morning then you may have missed the Motorla XOOM advert – well, it’s there for you to watch below 🙂

No word as to what we in the UK will be expected to fork out for the Moto slate – what are you prepared to pay for a tablet kitted out with a Tegra 2 dual-core processor, a 10.1-inch 1280 x 800p display, a 2-megapixel front-facing camera alongside a 5-megapixel lens round back?