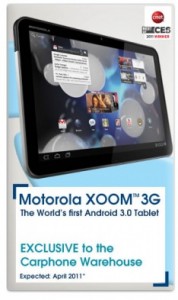 If you were expecting to have to visit your local phone network stores to grab a Motorola XOOM here in the UK then think again good gadgety people.

It has been announced that the XOOM will beavailable in retail stores as opposed to just being housed by network operators.

Carphone Warehouse and Best Buy will stock the 3G and wi-fi versions but if it’s just the wi-fi only version that’s tickling your fancy then you have the added choice of visiting Currys and/or PC World.

“We’re excited to be bringing a device as powerful as the Motorola XOOM to leading carriers and partners in the U.K.,” said Andrew Morley, vice president of marketing for Motorola Mobility, international markets. “Today’s announcement is testament to how well the Motorola XOOM has been received by consumers and carriers alike.”

There has been no information as yet on UK pricing and official release date, but stateside the XOOM’s base 32GB Wi-Fi only model will cost $600 (Â£372+Brit Tax).

Sanjay Jha, Motorolaâ€™s Chief Executive, made clear that although he sees the â€œpricing barâ€ as set by Appleâ€™s iPad, it was down to â€œchannelsâ€ to set prices. Wifi iPad prices start at Â£439, with the 3G model retailing for Â£541

The Android Honeycomb powered tablet has a 10.1-inch touchscreen with 1280×800 resolution and a 5-megapixel rear-camera with 720p HD recording. It also has a 2-megapixel camera in front, and an HDMI port, and a dual-core 1Ghz processor.

Judging by the Carphone Warehouse poster – It should appear in UK stores in April 2011.