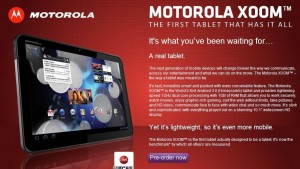 The Motorola XOOM tablet will be available in the UK the first week of April but only in its Wi-Fi only guise.

What happens if you want the 3G model?

That’s where Carphone Warehouse steps in as they have just confirmed that they’ll be selling the 3G version in April for Â£600.

You do get a free charging dock bundled in to the bargain if that makes you fell better.

CPW is selling the 3G Xoom for Â£599.99 SIM-free – I’ve had good ol’ rummage around the interwebs to see if I can spot any contract subsidised deals from other handlers and couldn’t spot anything out there as yet.

You can preorder the Wi-Fi XOOM from PC World who have tagged it at Â£499.99 but you’ll have to fork out another Â£34.99 for charging dock if you so desire.

It’s reasonable to think that the iPad 2 will be selling for around the same price as Motorola’s tablet in the UK but with the XOOM you get Flash Player 10.2 by the time it lands here.

Just as a quick reminder of what other niceties the Google Android Honeycomb packing Motorola XOOM packs: How does a 10.1-inch screen, 5-megapixel rear and 2-megapixel front camera, built-in HDMI port and SD-card slot suit you?

If you had to make a choice right now – XOOM or iPad 2?