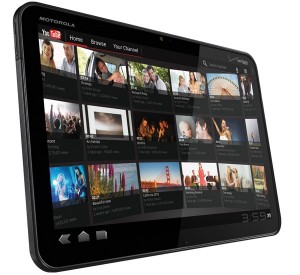 Looks like the Motorola XOOM has just been made available for pre-order in the UK with PC World announcing it will stock the Wi-Fi only model.

The XOOM almost matches the price of the Wi-Fi only version of the iPad although PC World has yet to announce when the XOOM will be actually available to take home.

The XOOM is the first device to come equipped with the tablet-centric Android 3.0 Honeycomb and it’s darned high on the spec front. The XOOM is sporting a 10.1-inch capacitive touchscreen, 1GHz dual-core processor, dual cameras – 5-megapixels at the back capable of 720p HD video recording and a 2-meg snapper up front.

The XOOM boasts 32GB of internal storage which is then expandable via SD.

At Â£449.99 it’s the first Android tablet to truly challenge the Apple iPad in price (a mere Â£11 difference) as well as spec.

I know you’re all expecting the new Apple iPad to be announced tomorrow but what are your predictions? Is the XOOM good enough to rock the iPad?