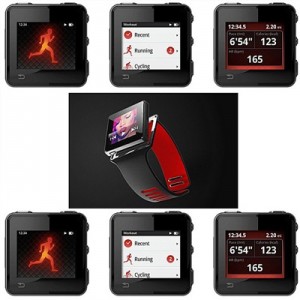 It appears that Motorola will soon be releasing an Android alternative to the Nike + iPod trainer. The Motorola Kore.

There were originally rumours that the Kore would be a replacement for Moto’s XOOM tablet but Fusible has uncovered a filing with the USPTO (US trademark) which has the Motorola Kore listed as an “electronic non medical portable physical activity monitor and fitness device for measuring movement.”

Further snooping around adds in some leaked pictures of a Motorola device that was guessed to be an iPod Nano rival – well, Droid-Life reckons that this could well be the aforementioned Motorola Kore!

The Kore may well be buddied with another fitness device named the Motorola Energia. Both devices have USPTO filings as well as domain names which could well mean that these may be appearing in a gym or park very soon.

I am expecting the Kore to monitor your fitness activity levels and help you tailor exercise and training plans in order to reach your particular goal. This would probably include software which will give you feedback and detailed analysis of your results which then could be shared on all the popular social networking sites so that people can congratulate you on your impressive display of healthiness.