Motorola MOVR – Move and Stream Your Films to Your Phone 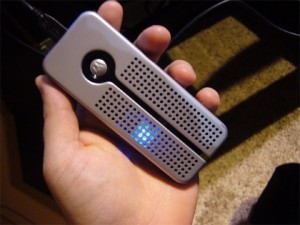 Over the last year or so Motorola has been talking about making a USB device capable of moving your video and other media via Wi-Fi and Bluetooth and they continue to talk.

The Moto MOVR will transcode your video from any source, and then broadcast (either via streaming or transfer) the content via Wi-Fi to cellphones and computers. At a recent trade show, Motorola was demonstrating this ability to a Q9 cellphone, a laptop, and an iPhone.

Dave Zatz reported that the quality was actually top-notch.

Moto ainâ€™t talking about when itâ€™s coming out, or how much itâ€™ll cost, but it seems like a neat little thing and I’m pretty sure that we’ll be hearing more about it over the next month or 3.