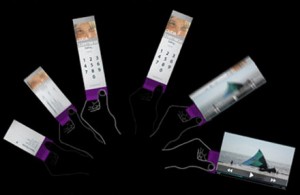 Motorola is celebrating 25 years of the mobile phone by looking another 25 ahead and to this end has just released a gallery of concept phones from its design studios.

Moto seems to think that we’re gonna be rockin myriad of mutating mobiles.

The Motorola 2033 is pretty neat – you’ll get visual overlays of the world around you with avatars and emoticons being projected on to people you pass by – beamed nasally it would appear from the other pics.

One Motorola design is very origami (Flexible OLED, praps) and can be folded into different shapes for different purposes (Phone, video, holographic projection) – Is there a designer missing from the Asus Fold/Unfold camp?

How about shake-to-change? It can be a video player as thin as a credit card then shake it – itâ€™s a long and narrow phone. With another shake of the wrist itâ€™s a business card for slinging your contact details to other devices.