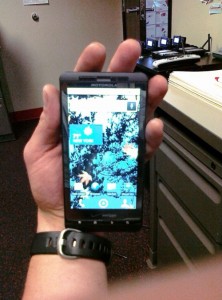 Gizmodo are playing this one carefully after the iPhone 4 story lead to a police raid.

Apparently this new Motorola was left in a Washington gym – say ‘Hello Moto’ to the Droid Shadow.

Everything seems to match up to the rumours and leaks about the interwebs. The follow-up to the original Droid will be exclusive to Verizon (if they can keep their hands on it) and will be loaded with an 8 megapixel camera (capable of shooting 720p video), a 4.3 inch screen and should be out in June/July.

The gym employee who found the phone confirmed some details when its keeper came back for it. Word is that it has a 16GB memory, runs on a Snapdragon processor and has a HDMI port.

Chances are it will be hooked up with Android Froyo 🙂