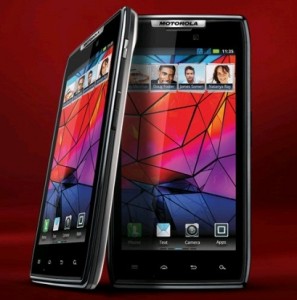 Motorola’s new Droid Razr phone has gone all official and the skinny smartphone is even thinner than the iPhone 4S.

The new Moto Razr manages to shave off a whole 2mm from the iPhone’s waistline measurement to be able to brag being the world’s thinnest smartphone thanks to its 7.1mm waferness.

There were enough leaks to make the spec sheet unsurprising – but at least they are good specs.

The Droid Razr is powered by a dual core 1.2GHz processor hooked up with 1GB of RAM and is said to leave the iPhone 4S behind in a drag race.

You get an 8-megapixel camera on the back that’s capable of recording 1080p video that can be enjoyed on its 4.3 Super AMOLED Advanced qHD (540×960 pixels) screen.

That screen gets a ‘splash guard’ as well as the new Moto having a stainless steel core and a Kevlar back – sounds like the Motorola Droid Razr should be able to survive life in a pocket or handbag then.

The battery will hand you 12.5 hours of talk time or 8.9 hours of video playback.

If you’ve been checking out the Atrix lapdock but want a thin phone then you’re in luck as the Razr has webtop and will slip into the Atrix docks.

MotoCast, a cloud-based storage service that lets you access your files on the move (think DropBox) comes ready and waiting.

It sounds like the Razr will land with Gingerbread, unlike the ICS touting Samsung Nexus, with an update to Android 4 later next year. Bit disappointing that if you ask me.

Although the full moniker of Motorola Droid Razr will be used in most markets we in the UK can get all nostalgic as it will be simply known as the Motorola Razr here. Ahhh… remember that clamshell best-seller from back in 2004 of the same name?

Clove has the Razr up for £380 SIM-free and contractless – to be honest they’re generally quick to slap a guesstimated price up on their site. It’s hard to tell if that will be the official cost or not. They state that the Motorola Razr will land on November 1st.