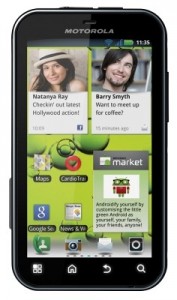 The first Moto phone to be announced since Google bought the phone company looks like a tough cookie and it’s heading to the UK!

The Motorola Defy+ is the first phone to appear with an added ‘+’ as well as being the first handset to be outed since Google decided that it needed to own a phone-builder as well as dishing out the OS.

As you have probably already guessed the Motorola Defy+ is the follow up to the original Defy.

Defy by name and Defy by nature

The Defy+ is prepared to take anything and anyone on – without the Friday-night bravado brought on by half-a-dozen Stellas.

This 3.7-inch touchscreen Gingerbread handset is not just bragging how tough ‘n’ hard it is because it is equipped with official IP67 certification. That means you can be sure it is water resistant, scratch resistant and dust proof.

The Moto Defy+ is aimed at those with an extreme lifestyle (or just plain clumsy) and even comes with a pre-loaded CardioTrainer app so you can keep an eye on your ticker as well as view and track your workout progress.

Under the hood you get a a 1GHz processor, a 5-megapixel camera and 2GB of storage.

The Motorola Defy+ will be available in the UK in a week or so but I’ve, as yet, no idea which providers will be stocking it.