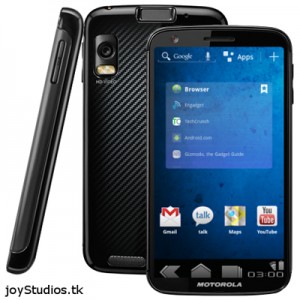 Android 3.0 Honeycomb has created quite a stir amongst the tablet cobblers but just think – what could Honeycomb mean to smartphones?

Well, it appears that JoyStudios have an idea – enter the Motorola Bee concept.

The Motorola Bee looks pretty slinky to me with its almost edge-to-edge screen and carbon fibre textured back.

The designers reckon that the Moto Bee would follow in the footsteps of the Motorola Atrix and be compatible with a laptop dock – this would also mean that it would be able to squirt content to your HDTV via a micro HDMI cable.

The Bee sports an 8MP camera with full HD recording (obviously) round back with a 5MP staring at you at the front. The Bee is rocking a 4.3-inch Super AMOLED multitouch display running at 1280 x 720 resolution and will feature a choice of 32 or 64GB internal storage.

I’d love to see this become a reality – anyone else?