Motorola Atrix – The Most Powerful Android Smartphone Yet 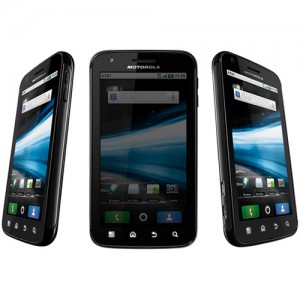 Motorola is claiming that their Android-powered Atrix is the most powerful smartphone ever made and it certainly is a beast and equipped with a screen resolution that will outshine any of its Android rivals.

But what’s the point of so much power? Well this is more of a multi-tool than just a smartphone.

There’s plenty of gadgets to hook it up to. There’s the basic charging and syncing dock which allows you to set up profiles so that the phone displays different widgets and shortcuts when it’s plugged into different docks – weather in the kitchen, email in the office, that kinda thing.

The Atrix also gets a multimedia dock which increases the phones one micro-USB port and mini-HDMI up to three USB ports and a full-sized HDMI port. Just plug that into a telly or monitor, and the Atrix shows off its in-built Linux-based OS called ‘webtop’.

In Webtop mode, you can surf the Web using full-blown Firefox, just like a real computer. The browser handles plenty of Web apps, so as long as you’re connected to the Internet you can work on your Google docs, edit photos in Picnik – you get the idea.

Naturally you still can use the phones Android features whilst in Webtop mode which means that you can play games and run your apps on the big screen.

What everyone else has been focusing on, however, is the laptop dock which adds a screen and a keyboard to the Atrix. It doesn’t contain a processor because the Atrix does all the work. The dock does contain two batteries, which gives it 7 hours of life and leaves you with a fully charged phone.

It’s a ridiculously impressive phone and the only place it seems to fall down is with the 5MP camera as most seem to be rocking an 8MP snapper these days.

I’m not sure how confusing having three interfaces depending on what you’re using it for will be – but there’s no denying these specs really: