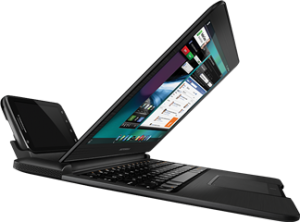 If you’re Stateside and counting the days til the Motorola Atrix 4G lands then good news – AT&T have stated that is will arrive no later than March 6.

Pre-orders will start on February 13th (another gadgety St Valentines Day gift idea) and the Atrix will cost $200.

That’s all the good news. Now the not so shiny news….

Remember how this most powerful of Androids has many tricks up it’s multi-sleeved jacket?

Well, Moto’s Atrix greatest abilities and attention has mainly been centred around it’s clever docks – the greatest trick being able to power a laptop dock thanks to its Tegra 2 processor and dual 1GHz cores. The thing is that the “lapdock” will cost $500 on its own! – or it can be packaged with the Atrix and a two-year contract for a total cost of $500! Yup, you read right.

There will also be a multimedia dock so you can hook the Atrix up to an HD screen. This will come bundled with a Bluetooth keyboard and mouseâ€š and a remote control – yours for $190. There are rumours, however, that the dock may fly solo for $60 via friendly 3rd party retailers.

What really has surprised me (apart from the lapdock price) is that the Atrix is being shipped with Android 2.2 Froyo rather than the latest 2.3 Gingerbread. As well as that it wont be able to play or record video at the promised 1080p res when you first get it. Oddness!

Motorola promises to enable these features in a software update. So – what’s the point in rushing for a not quite finished phone with expensive peripherals?

Any idea? Let me know.