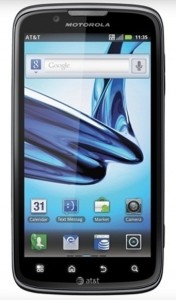 The Motorola Atrix caused quite a few curious looks when the smartphone unveiled its transforming skills – it proved that not only could your mobile become a media centre it could also be a fully functional laptop. Now the Motorola Atrix 2 is taking things further!

No points for originality with the name but at least the Atrix 2 has some new stuff packed into its clever body.

The most noticeable change is the 4.3-inch qHD screen but flip the new Moto over and you’ll see that the camera now has an 8MP sensor partnered with an LED flash. That snapper will also capture full 1080p HD video. That’s pretty handy because you can squirt that over to your big screen telly via HDMI.

It is said that the Atrix 2 will be powered by either a 1.2GHz or 1.5GHz processor with 1GB RAM. Internal storage will be 8GB but that can be boosted to 32GB thanks to microSD.

Curiously, for a master of transformation, the new Atrix will run on Android 2.3.5 and not Ice Cream Sandwich. Personally I thought that ICS would be a no-brainer for this multi-personality mobile.

Its other purported specs include Android 2.3.5 (not Ice Cream Sandwich?), a 1.2GHz or 1.5GHz processor, 1GB of RAM, a hyper speed HSPA+ 21Mbps modem (as was rumoured to be landing on the iPhone 5) and 8GB of memory, expandable to 32GB via microSD.

That’s all cool but now comes something a little more difficult to swallow.

If you weighed up the cost of the Atrix Lapdock thinking that when the next Atrix came along it would be like upgrading your phone and laptop at the same time – hence a bargain right?

Errrrrrm…. no. Rumour has it that the Atrix 2 won’t be compatible with the dock tailored for its predecessor. Instead, Moto wants you to buy everything all over again. It sounds as though you’ll have to save up for the Lapdock 100 and HD Station.

Word on the street is that the released will be around October 18.

Do you have the original Atrix and will you be looking at Atrix 2? Let me know your thoughts.