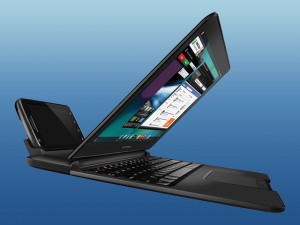 Orange has confirmed the UK launch of the Motorola Atrix – the dual-core dock loving smartphone.

The mobile’s party piece is, however, its love of docking.

The Atrix slides into two accessories: an HD Multimedia Dock, or a Lapdock.

The Multimedia Dock turns the phone into a media hub of sorts. Not only does it sit the phone up like an alarm clock it will hook you blower up to your computer or TV via USB or HDMI.

The Lapdock (not lapdog as one colleague thought I’d said) is an 11-inch laptop-style screen and keyboard gubbins that has a slot for the Atrix which in turns becomes the netbook’s brains – this means that you can then join all the other people tapping on their netbooks using the free Wi-Fi in a well known cafÃ© chain whilst making that one tall latte last 2 hours or so.

Orange is offering a free Work and Play kit, containing the multimedia dock with a mouse, keyboard and remote control, to Orange customers who upgrade to the Atrix. New customers will get the kit for Â£50.

The Orange and T-Mobile partnership, Everything Everywhere hasn’t said how much the Atrix itself will cost – but be sure that it will be landing at the higher end of the pricing graph. Good news is that it will be free on a two-year contract costing Â£35 per month which will give users 600 monthly minutes, 750MB of data and unlimited text messages.

Different tariffs will nab you a discount on the lapdock, which costs a wallet whimper-inducing Â£300 on its own. Â£300 could get you a half-decent REAL laptop, but then you wouldn’t be able to smugly reply to the comment “that phone is like a little computer” with “actually it IS a little computer – marvel as I connect it to the screen and keyboard dock“.

The clever Android-powered Atrix adopts different software when you dock it, and offers the Firefox Web browser.

Early May is when the convertible smartphone/media hub/netbook appears – which is also the same time as a raft of Atrix rivals land at Everything Everywhere. Â So the fight is on!

Is a dandy dock discount driving you down the dual-core Moto way or just around the docking bend?