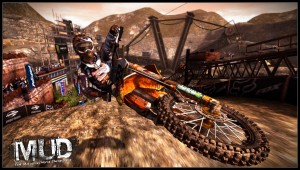 MUD is the official FIM Motorcross World Championship title on the PS Vita and a direct port of the PS3 game with only a few changes; these being less riders to battle against and less detail than its bigger PS3 brother, but we don’t care.

After a two trophy ‘ping’ for doing absolutely nothing, you can let the motorcross madness commence.

First off this is an arcade racer. There is no losing your back end on this game, which may disappoint the hardcore. Not even The Rock could elbow you off your machine. This is a real shame as I was expecting more sim type handling or even a mixture of both, but sadly not.

MUD comes with all the usual different game modes, which makes for an interesting experince. Checkpoint, standard race, head to head and trick battle all make getting dirty real fun, but saying that, there is a distinct lack of mud, dirt and flies. This game is cleaner than Jamie Oliver’s kitchen.

Each track does feel and look similar to the last but somehow the game keeps you wanting to play it more. Despite lacking touch functionality, which is not a deal breaker in my book, the shoulder triggers are your accelerate and brake. Performing a burning start (holding both triggers then releasing brake) on the ‘go’ will give you the edge on the first corner. 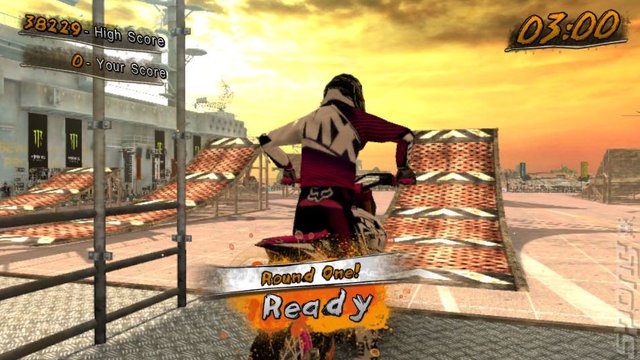 Holding down the X button will open up your trusty can of Red Bull, which of course gives you wings to beat the AI riders. To fill up this limited supply of energy drink you need to perform a ‘Scrub’, whipping your back-end out, which is all very easy. Unlike the first Wipeout game (if you can remember) when scraping the sides of the track saw you come to a crunching halt, in MUD you can happily slide around the sides with a big smile on your face.

Showcasing tricks in the arena is a nice touch and a break fom the track racing. A tap of the face buttons as you fly off a large ramp can see your rider perform little stunts that don’t ever have the wow factor but are still great fun to pull off.

With a soundtrack that could wake the dead, MUD is an addictive, solid game that could have been Pure but just misses the mark.

Lizard Rating 7.5 – just short of a belly full of flies.