Moto Milestone / Droid Will Be Available in UK from Next Week 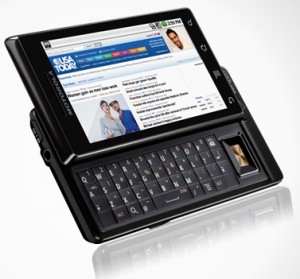 The Motorola Milestone, or Droid as itâ€™s known Stateside, has been confirmed to land in Blighty from December 7.

The Milestone will be the first handset powered by Android 2.0 (or Eclair) and it will come with a 60 day free trial of MOTONAV.

Expansys has now confirmed that it’s expecting shipment of the handsets on December 4 and will release it to all from December 7.

To double the proof – The Milestone has also appeared on Motorola’s UK site.

MOTONAV is the Milestone’s turn-by-turn navigation which integrates with Google Maps. It jumps straight to Nav mode when snapped into the funky dock (you can obviously enter the application normally, sans dock). Google has spared nothing with this; providing its satellite, map, traffic, and location info with text-to-speech directions. Of course, the big G takes it one step further and adds layers like parking info, ATM spots, etc.

That dock is pretty cool as it allows your Milestone to sit on your desk or bedside surface and act like an alarm clock – it also comes with a car mount for using the device as a proper GPS unit. I don’t usually bother with this stuff but it’s pretty neat stuff – Moto use sensors to alter the handsets functionality. The dock turns the phone into that desk clock with widgets while the car mount just boots the phone into nav mode.

Naturally many would look at the new Moto as an iPhone challanger. It looks pretty slick and the software is definitely on the right track – it just hasn’t arrived there yet if you ask me. But, as those not yet tempted by Apple will point out as a counter argument – Apple can’t match Google in terms of messaging, email, and customisation.

It comes with a 5.0-megapixel camera with a dual LED flash, an 8GB microSD card (expandable to 32GB), a 3.7-inch multi-touch screen displaying at 265 DPI and a slide-out QWERTY keyboard. Motorola also claim itâ€™s the thinnest QWERTY slider on the market

I reckon the iPhone is still better but, to be frank, I can see that the Milestone is probably the best Android phone out there 🙂