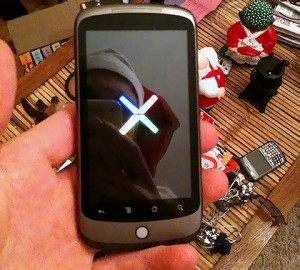 After this picture appeared on Twitter following the breaking news on the same microblogging site that some Googlers were handed the new Google blower more information has trickled out.

Not only has Google confirmed that its employees have been given a new mobile device to test but it seems that the new smartphone is to be called Nexus One.

Mario Queiroz, VP of product management, has posted on the company’s mobile blog that works have been given â€œa device that combines innovative hardware from a partner with software that runs on Android to experiment with new mobile features and capabilities” and that “This means that they get to test out a new technology and help to improve it.”

The New York Times reports that longtime Android buddy, HTC, has been given the honour of building the Google phone, while the Wall Street Journal reckons that Google plans to sell the phones itself, without a network partner – this will mean that the Nexus One will be a SIM-free phone.

It seems that the new Nexus One handset has been pretty much entirely conceived by Google right down to the design.

It will be packing that 1GHz Snapdragoon processor, a 3.7-inch OLED screen, 5 megapixel camera and Android 2.1.

It it might even be coming to the UK!

Google certainly hints at it in an official blog post – Ok, so it doesn’t actually name the Google Nexus One phone I reckon there’s more than a hint there 😉

So, with the renowned search engine as well as the Chrome browser, Chrome OS and Android this next step is a big thing and rest assured – as I get more info I’ll be passing it straight onto you lovely gadgety people!