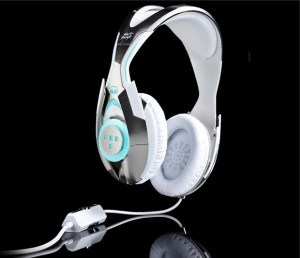 Ok – you’ve got the Tron: Legacy controllers, the free location-based iPhone game and the special edition Tron: Legacy mouse from Razer but something is missing…..

Yup – you need a decent set of cans to listen to Daft Punk’s Tron: Legacy soundtrack on.

Thankfully you can now plug-in to some Monster Tron light-up T1’s, T3 in-ear headphones and Identity iPod dock – the latter is modelled on the film’s data disc.

You can also get the Tron app on your iPhone or iPod touch which will unlock a film-themed alarm clock for use with the dock.

The T1 headphones are rocking noise-isolating technology as well as ‘an adjustable LED Light Drive system’ – yeah, they light up 😉

I’m digging the fact that they also come equipped with a removable boom mic, which attaches to either ear to turn it into a gaming headset or for hands free chatting. Bonus!

As for Daft Punk’s kicking Tron: Legacy soundtrack – that is also bundled in with the headphones, which are available in black or white by-the-way.