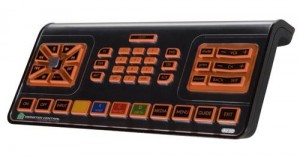 To be honest it’s the controller from Monster that’s caught my eye purely because of its retro-ness.

I can’t find any dimesions for it but it is said to be a â€œtabletopâ€ controller so that could all depend on the size of table.

Any wiser? All I know is that it looks kinda cool and for a Monster product it’s reasonably priced (unlike their cables).

As for those cables – they’re really quite expensive but really – who actually buys them?