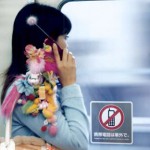 I see the point of having a mobile signal on the tube, on planes and trains but there’s so many people that’s going to abuse this.

A commuter rail company here in the UK (C2C) will install cellphone signal-blocking film on train windows in order to keep the peace.

The film, which was developed in America, prevents cellphone signal from entering (and leaving) the train. With no signal getting through, people wonâ€™t be able to talk, loudly or otherwise, on their cellphones.

This film will only be installed on cars that are designated as quiet cars – you know, the ones that are there to stop the endless prattle of “I’m pulling out of the station now” or “so, what do you fancy for dinner..”.Â  The film will merely help ensure that theâ€”no phones!â€”part of the quiet coach takes place.

Now, if only they could get a film that ensures hand-held games are muted when not used with headphones and that headphones do not have audio-leakage…………..