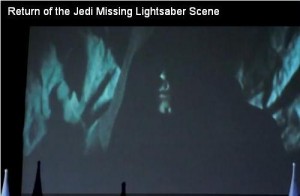 There’s been a couple of noteworthy announcements made over at the Star Wars Celebration V event in Florida.

George Lucas has unveiled the news that there will be a full Blu-ray box-set and excitingly has aired a missing scene from Return of the Jedi that shows Luke making his lightsaber a cave on Tatooine!

The short section that hit the cutting room floor involved Darth attempting to sweet-talk Luke over to the Dark Side as he does a bit of DIY lightsaber building after loosing his original one when fighting his dad.

As well as that great bit of ‘extra’ Star Wars geekery it was revealed by the producer of the first two Star Wars movies, Gary Kurtz, that the original ending for Return of the Jedi was not included in the film that we all know and love. Kurtz announced that “we had an outline and George changed everything in it.”

Apparently Han Solo was supposed to get killed off but “by that time there were really big toy sales and that was a reason,” as “the toy business began to drive the [Lucasfilm] empire.”

I wonder what other secrets are out there……..

In the meantime check out Luke building his green lightsaber below: