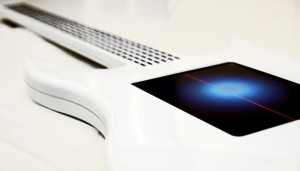 If you’ve been brought up with playing Rock Band and Guitar Hero then you may be surprised to discover most guitars have strings.

Well this bad boy uses a large touchscreen to get you shredding.

The Misa Digital Guitar is the work of Sydney-based designer Michael.

It has 24 frets and a large multifunctional touchscreen which hooks-up to the appropriate software on your pc.

It is an advanced type of MIDI controller that is powered by a 500MHz AMD Geode CPU and runs Linux under the hood – you donâ€™t need Linux to use the guitar though.

The Linux firmware code is open source, which allows programmers to modify it to their liking.

While MIDI controllers and guitar-emulating synthesizers are nothing new to the music world you have to admit that the Misa does look rather more special than a short keyboard with dials and knobs.

I am obsessed with digital guitar. But I also love electric guitar, and I have learned what itâ€™s good at and what itâ€™s capable of. Some of its most important qualities and characteristics stem from the very fact that the electric guitar is made out of wood and strings. A guitar string is â€œbeautifulâ€ â€“ because the sound generated comes from the very vibration of the string, interfering with a magnetic flux and inducing an electric voltage, which is then amplified. Why would you want to emulate that? It is perfection. It is pure nature. It is in the analog domain. I did not intend the Misa digital guitar to replicate a traditional guitar.

Watch and listen to the clip below: