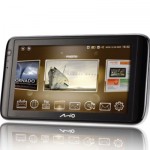 The Mio Moov V780 is one of those curiosities that’ll either take the market by storm or is doomed to sit in the corner of the store.

Mio are hoping that they’ve spotted a gap in the market for a SatNav that’s also capable of chucking out hi-def video through a HDMI slot or onto its 7 inch screen.

To top all that – it also has a keyboard dock kinda like the iPad style.

So, what’s the low-down then?

Well, the Mio Moov V780 is equipped with a 7 inch capacitive WVGA screen and H.263/263, DivX, MP4 and an external TV antenna so watching flicks whilst trapped in a jam should be nice enough.

If you fancy doing some surfing the Moov V780 is rocking Wi-Fi and an option for HSDPA or WiMAX.

When you get back to base you can utilise that HDMI port and watch your vids in 720p video on a flatscreen TV.

I have to applaud Mio for the range of planned accessories that’s being planned for the Moov V780.

My favourite has to be the keyboard dock which converts it into a Windows CE notebook complete with Exchange and Gmail support.

The Mio Moov V780 is set to debut at Mioâ€™s CeBIT press conference this Thursday.