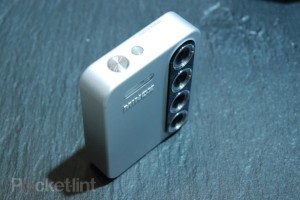 Minox has a very small yet potent camera on show at Photokina 2010.

The PX3D was spotted by PocketLint and it certainly has caught my eye.

As well as appearing to be wrapped in a very small package, this 3D snapper reckons that 2 lenses is not enough and boasts four of them!

Apparently these were developed by Daimler as in-car sensors – soon Minox decided to cobble the quadruplet of 9mm 5 megapixel lenses together and arrange them vertically and soon discovered that this actually lends itself to some high quality 3D imaging.

Minox hopes to bring the PX3D to market in the summer of 2011.